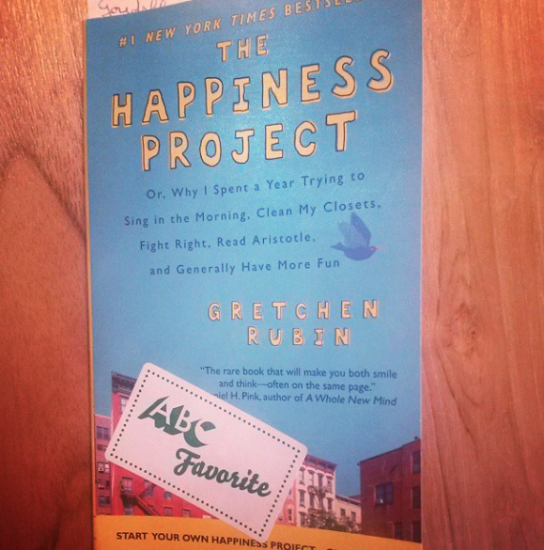 I just finished this book called ‘The Happiness Project’, written by Gretchen Rubin. It’s not that she’s depressed or unhappy, it’s just that she thinks she can be happier than she is. In order to achieve this she makes a list of twelve things she wants to realise, one for each month of the year. To help her with this she also makes a list of ‘Secrets of Adulthood’, which contains lessons she’s (finally) learned over the years (they’re handy and funny and I especially like ‘Most decisions don’t require extensive research’ and ‘over-the-counter medicines are very effective’) and a list of the ‘Twelve Commandments’, which are the overarching principles that started to emerge while putting this project together. Both these lists come back throughout the entire book to help her reach her happiness goals and one of them in particular has taught me an important lesson: ‘Be Gretchen’. That’s all it exists of. To be Gretchen, a.k.a. herself.

Of course this isn’t completely new to me. I think every person has heard that advice too many times in their lives to still be able to realise exactly what it means and also how much it can mean when following it up. But in her book Gretchen gets back to this in almost every chapter and thus  with every goal she wants to achieve, and that way she shows how to really use this advice and maybe even more importantly how to figure out what it means to you, to really be you. Part of that is to admit to yourself what you really like, think, hope, etc.

So, that said… a quick first list of Being Sarah in no particular order… Here it is: